A - Introduction on the general functioning

Wireguard is a recent (2017) VPN protocol and under free license. In 2018 it is integrated in the Linux kernel.

Here is an interesting quote1 from Linus Torvalds from the mailing-list about the Linux kernel:

I see that Jason actually made the pull request to have WireGuard included in the kernel. Can I just once again state my love for it and hope it gets merged soon? Maybe the code isn’t perfect, but I’ve skimmed it, and compared to the horrors that are OpenVPN and IPSec, it’s a work of art. Linus 1

If you are under Debian 10, it is necessary to activate the backports of the distribution.

In order to ensure maximum confidentiality, the umask should be set to 077 before passing these commands:

To generate a private key the command is :

To generate the public key derived from the private key, the command is :

We can combine these commands into a single line for convenience :

Usually the private key will go into the /etc/wireguard/wg0.conf file. The public key can be found easily by displaying it with: wg show wg0 (or just wg if only one interface)

The white paper states that key transfers are not managed by Wireguard, as for SSH it is up to you to transfer your public keys according to your methods/tools.

There are two ways to launch wireguard :

With each command for example :

From there, the interface is mounted it will remain to add the keys of the peers and the endpoints and for that always in manual mode there are two options, either one will read the file a file of conf containing the infos of the peer and the interface with :

Or without the wg tool :

That’s it… with Wireguard it’s all about networking :)

The wg-quick tool allows to pass the ip commands for us, that is to say :

I have based the following on the man commands.

The syncconf option of the wg command :

The strip option of the wg-quick command :

Use strip to out-put a configuration file with all wg-quick(8)-specific options removed, suitable for use with wg(8).

So I combine these two commands to modify the /etc/wireguard/wg0.conf file “without disrupting current peer sessions”. This is the typical case for adding a client on a server for example.

The final command will be :

Beware, <(command) is a process substitution in bash and if you add a space between < and ( there is an error, I got stuck on that for a while 😬.

4 - Automate the launch of the WG interface

To start wireguard as a service, just enter :

wg0 being the name of the wg0.conf file in /etc/wireguard.

To perpetuate at each boot of the machine :

Which must have as an answer :

Config file /etc/wireguard/wg0.conf of my VM1 :

Config file of my VM2:

As indicated in my note below (see “Client/server or server/server” or the “roaming” part of my “Notes on the white paper”) in this configuration only VM2 can ping VM1. Indeed, VM2 knows the endpoint of VM1 but not the reverse.
On the other hand, from the first ping of VM1 to VM2, VM1 will dynamically update its cryptokey tab by adding the endpoint of VM1 which will allow VM1 to answer or initiate a connection later.

To remember in all cases: **In order for two hosts to communicate, each must have the other’s public key.

Then we can want a peer to peer or site to site VPN which is the same as client/server or server/server.

In the case of a client/server connection, it is always the client who will want to connect to the server. The client must therefore have the Endpoint:port of the server. The server, on the other hand, does not need to have the client’s endpoint:port. Obviously the server will not be able to initiate a communication with the client, because it does not know where it is. On the other hand, it will be able to answer him because it will dynamically update the endpoint:port from the moment the client contacts it. In my tests it is obvious, as long as the client has not pinged the server, the server cannot ping the client. As soon as the client has pinged the server once, the server can ping the client. This technique allows perfect roaming because the client can change connections all the time. By the way, the wg command is updated automatically, as can be seen with watch -n 1 wg , at the time of ping, the cryptokey table is updated with the client endpoint.

In the case of a server/server communication, it will be necessary to specify the endpoint:port on both servers in order to have a connection that can always be initiated by one or the other server.

To avoid any fluctuation of speed or latency due to the Internet network, I only worked locally for these tests. All the tests are done between two VMs on my laptop, on a gigabit local network. The VMs have : 512MB of RAM and 2 cores of i7-8550U. The storage is on SSD. The test file is a 1GB file that can be downloaded on proof.ovh.net OpenVPN is set to UDP for this test.

Rsync by the network and thus by SSH of a 1Gb file:

I mounted a samba on VM-1, I mounted the samba share on VM-2 on the mount point /smbshare

I ran an rsync of the 1GB file. Since the mount point is local, rsync doesn’t go through an SSH connection with VM-1 so there is a noticeable performance gain:

2-4 - Conclusion of the Wireguard benchmark

In my test conditions, Wireguard is on average 3.3x faster than OpenVPN. 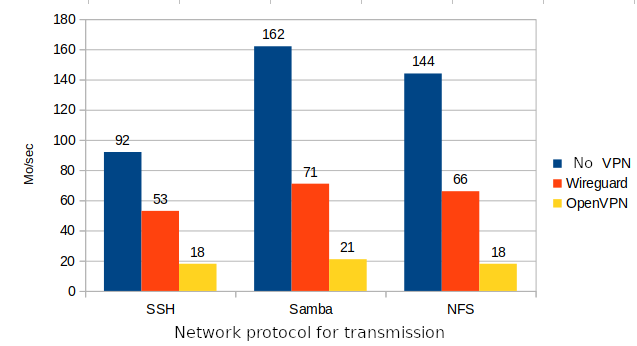 To go further and better understand Wireguard, I recommend reading pages 3 to 7 of the white paper available on the Wireguard website

Here are my reading notes.

Some notes from the white paper (page 3-7)

WG is stateless, no need to deal with connection/disconnection/demon etc… WG like SSH does not deal with key exchange. The keys are short and therefore simply shareable. “Finally, WireGuard is cryptographically opinionated, it doesn’t use old protocols or crypto suites, only some of the latest ones and there is no flexibility on that. That’s what makes it very strong too. WG has a built-in DoS protection using “a new crypto-cookie mechanism for IP address attributability”. So WG only works on layer 3 and nowhere else and supports both ipv6 and ipv4.

How WG routing works: The fundamental principle of a secure VPN is the association between peers and an IP address that is authorized as source IP. In WG peers are identified strictly by their public key (32bits Curve25519). This means that the operation is a simple mapping between a set of authorized IP addresses and public keys. It’s as simple as that.

Here is an example of a crypto key routing table:

The interface itself has a private key and a listening UDP port, this is the first line. This is followed by a list of peers identified by a public key and each peer has a list of allowed source IPs.

As a result, firewall rules are simple and any packet arriving on a WireGuard interface will have an authentic and reliable source IP (in addition, of course, to the guarantee of perfect transport secrecy via encryption). This is only possible because WG is strictly based on layer 3. In case you want to route all traffic through a WG peer to another WG peer this is possible by simply configuring the cryptokey routing table as follows:

“Here, the peer authorizes HIgo…f8yk to put packets onto wg0 with any source IP, and all packets that are outgoing on wg0 will be encrypted using the secure session associated with that public key and sent to that peer’s endpoint.”

**Endpoint and roaming: It is important that peers can communicate over the Internet with source IP addresses that are not necessarily specified. This is why pre-specifying an external IP and a UDP port is optional. It is optional because if WG receives a correctly authenticated packet from a peer, it will use the external source IP to determine the endpoint. Since a public key uniquely identifies a peer, the source IP of the encrypted WG packet is used as the remote endpoint.

IMPORTANT: note that the listening port and the sending port of the packets is always the same! This adds simplicity and better reliability especially when traversing NAT. So WG knows that if the packet comes from x.x.x.x:21841 it will have to reply on this same port. So there is no need to keep a NAT session open for example as the port will not change, however: “the interface can be optionally configured to periodically send persistent authenticated keepalives”, this is the option: PersistentKeepalive = XX.